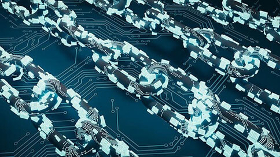 If you were to ask the general population what they know about blockchain technology, you wouldn’t be surprised to hear that most of them either know nothing at all or can connect the blockchain to cryptocurrencies. They wouldn’t be wrong. Cryptocurrency is, in fact, dependent upon blockchain technology and it is the technology that has paved the way for bitcoin to become possible. Without it, the world’s most famous and valuable crypto wouldn’t exist. This is because when someone makes a payment with bitcoin, the payment is authenticated as another block of information on the chain. The blockchain takes the place of a bank to keep a record of payments, but unlike a bank, there is no central authority. The decentralised nature of bitcoin, therefore, hinges on this blockchain acting as a public ledger available to all but completely secure.

Looking Further than Bitcoin and Crypto

Yet, this is not the only use for blockchain technology. Despite bitcoin relying on its blockchain, it doesn’t work in the other direction.

Blockchains are used for other purposes in other industries. Here are some examples of industries that have already tapped into the blockchain potential:

One issue constantly facing musicians and those involved with creating music is that they do not receive the money they are owed.

It is not unheard of that megastars are seeking compensation from other music organisations for not paying them the royalties they deserve. Copyright infringements are rife and the court cases to address these problems are just as common.

The blockchain can counter this issue by providing a traceable and publicly available set of information for each song and who is owed what royalties from it.

The same idea can be applied to other forms of art such as photography. Photographers can trace the use of their images on the blockchain and even allow experts to track the origin of a piece of art.

One issue when buying a car is that you can never be certain that what you are buying is exactly how it was advertised or sold to you.

People can tamper with the mileage on a car and get around telling you about its maintenance history. What you think is a vehicle with an excellent track record could have been used a lot more and have been in the garage frequently.

This is why some businesses in the automotive industry have adopted blockchains and are using them on some vehicles to record maintenance and mileage. This is to prevent odometer fraud and vehicles being inaccurately sold by criminals.

Some sports teams are using blockchain to create their own tokens for fans to use to buy match tickets and merchandise.

This is a way of creating a currency that is valuable to a select community. The blockchain is also being used by teams to implement fair voting systems to do with player jerseys and alike.

Using blockchains to cast votes is also a topic being considered by governments to ensure secure election processes without the need for recounts.

The freight industry is welcoming blockchains to streamline often complex processes and reduce the amount of paperwork required en route.

It would enable businesses to track packages across a destination as they are scanned by different workers. It was also rumored to be a solution to the backstop issue within the Brexit negotiations.

From these four examples, it is easy to spot blockchains that have more purpose that what we most associate them with. In fact, it could be argued that the hype of owning a Luno Bitcoin wallet and sending secure payments around the world faster and cheaper may be making the general population blind to the other possibilities at hand.

The truth is, understanding the facts around blockchains will help us look beyond cryptocurrencies. Here are some of the key facts you may not know about blockchains already.

Blockchain Also Has a Place in Science

Thanks to grants and our natural thirst for knowledge, the scientific community has been able to amass a wealth of studies that help improve policies and inform public services.

However, scientists often come stuck when they try to replicate studies to authenticate results further, or tweak studies to find out more (and further our knowledge).

This happens because the original study’s data is not publicly available or easy to access. The blockchain could help in this matter by being the place where data is stored for scientific study.

Researchers across the globe could access a public ledger of data to conduct studies that other research has been based on, allowing future results to accurately verify information or increase our understanding.

Consider how many times two different researching teams have conflicting views about the same subject. The conflict may arise due to a difference in the quality or amount of data.

Blockchain technology holding the same data set would allow all research parties to research from the same information. Although this would help scientific groups to collaborate and progress with findings, it does also call for high-quality data to be used.

Blockchain as the Answer to ID Verification

Verifying our identity has become part and parcel of modern life. It is not just airports where we have to dig out our passport, but also gyms, libraries and any other time we sign up for a membership or service.

This can be time-consuming and inconvenient, especially when each vendor wants a different type of ID or a different combination of documentation.

Although blockchain has yet to be used in this way. There is potential for blockchain to be a solution and give every citizen of a country – or a group of countries that opt into the strategy – to record personal information and their identity on the blockchain.

This would make ID verification seamless in certain locations.

EU citizens already have something similar to this with their information stored on a chip placed on their ID card. An upgraded version of this on the blockchain could be the answer, with healthcare professionals having access to this in the event of an emergency.

Soon You May Be Buying Blockchain-Based Products

This is because products are also going to be made with blockchain technology powering them – and it is already happening.

Some smartphone developers have already made blockchain smartphones. Other products that are in lien to be developed include devices around the home that recolonise the way we live.

These devices will be connected and change how we do tasks and chores at home. They will also be connected to do so, such as telling a small device in the corner that you want to watch Netflix or to turn the dishwasher on.

The problem when lots of devices are connected is that they make you more vulnerable to hackers.

Blockchains can prevent hacks and protect your data by securing your at-home network on IoT devices. Methods of combining the two are already been worked on to keep consumers safe and their data protected.

Other Facts You Should Know About Blockchain Technology

The potential for blockchain has now been well established, but what has it already achieved? Here are some shorter facts about the technology that not a lot of people realize:

It Doesn’t Mean We Should Forget about Cryptos

Just because the success of blockchain technology is not tied to cryptocurrency doesn’t mean we should forget about them. Cryptocurrencies, as well as digital tokens, ICOs and smart contracts,  are all the biggest successes of blockchain to date.

The benefits of cryptocurrency are huge, with faster, cheaper and more convenient payments becoming available worldwide.

This has a significantly positive impact on unbanked populations who do not have access to a bank account. For people sending money home to underdeveloped countries, they can send more money without incurring fees or time delays.

These glimpses into cryptocurrency’s power to dustups the financial status-quo should not be forgotten as other developments occur.

What Will Blockchains Do to the Job Market?

Technology and the internet, in particular, has had a significant impact on the job market in the developed world. Many jobs were replaced with machines that could do the work just as efficiently and many of these jobs were taken up by the working classes.

The same could happen once blockchain technology reaches its golden period. Many jobs may be displaced due to businesses utilising blockchains.

For example, earlier it was discussed that freight companies may use blockchains to streamline shipping processes. There is a strong chance that this development could put some workers out of a job.

Jobs may be lost due to blockchain, and they may be lost more in manual professions. However, the blockchain may also create lots of new jobs that are not around today. Most of these jobs will be directed at tech-savvy types and us geeks.

So, Should You Invest in Blockchain Startups?

There are so many positive noises coming from industries and businesses that are using blockchains. Yet, it is crucial to realise that this trend is new.

The answer may be yes, but it may be smarter to invest your money in established technology companies who already own a strong market share.

Blockchains can be made for everyone and choosing a small startup may not guarantee you success. Placing your investment with companies who are actively looking at blockchains and already have a foothold in their market could be the wiser move.

The Takeaway Fact to Remember

They are a key player in the fourth industrial revolution and in that sense, they are exceptionally disruptive to all current technology.

Consider blockchains to be the puppet masters of the future of the tech and many other industries. It may just take a little while for the curtain to be pulled back completely.