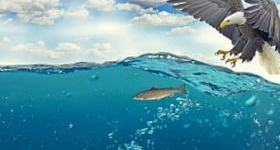 In order to successfully work with the Linux sed editor and the awk command in your shell scripts, you have to understand regular expressions or in short regex. Since there are many engines for regex, we will use the shell regex and see the bash power in working with regex. First, we need to understand what regex is, then we will see how to use it. For some people, when they see the regular expressions for the first time they said what are these ASCII pukes !! Well, A regular expression or regex, in general, is a pattern of text you define that a Linux program like sed or awk uses it to filter text. We saw some of those patterns when introducing basic Linux commands and saw how the ls command uses wildcard characters to filter output.

There are many different applications use different types of regex in Linux, like the regex included in programming languages (Java, Perl, Python,,,) and Linux programs like (sed, awk, grep,) and many other applications.

A regex pattern uses a regular expression engine which translates those patterns.

Most Linux programs work well with BRE engine specifications, but some tools like sed understand some of the BRE engine rules.

The POSIX ERE engine is shipped with some programming languages. It provides more patterns like matching digits, and words. The awk command uses the ERE engine to process its regular expression patterns.

Since there are many regex implementations, it’s difficult to write patterns that work on all engines. Hence, we will focus on the most commonly found regex and demonstrate how to use it in the sed and awk.

You can define a pattern to match text like this:

You may notice that the regex doesn’t care where the pattern occurs or how many times in the data stream.

The first rule to know is that regular expression patterns are case sensitive.

The first regex succeeds because the word “Geeks” exists in the upper case, while the second line fails because it uses small letters.

You can use spaces or numbers in your pattern like this:

regex patterns use some special characters. And you can’t include them in your patterns and if you do so, you won’t get the expected result.

These special characters are recognized by regex:

You need to escape these special characters using the backslash character (\).

For example, if you want to match a dollar sign ($), escape it with a backslash character like this:

Despite the forward slash isn’t a special character, you still get an error if you use it directly.

To locate the beginning of a line in a text, use the caret character (^).

The caret character (^) matches the start of text:

What if you use it in the middle of the text?

It’s printed as it is like a normal character.

When using awk, you have to escape it like this:

The dollar sign ($) checks for the end a line:

As you can see, it prints only the line that has the matching pattern only.

You can filter blank lines with the following pattern:

Here we introduce the negation which is done by the exclamation mark !

The pattern searches for empty lines where nothing between the beginning and the end of the line and negates that to print only the lines have text.

The dot character is used to match any character except newline (\n).

Look at the following example to get the idea:

You can see from the result that it prints only the first two lines because they contain the st pattern while the third line does not have that pattern and fourth line start with st so that also doesn’t match our pattern.

You can match any character with the dot special character, but what if you match a set of characters only, you can use a character class.

The character class matches a set of characters if any of them found, the pattern matches.

The chracter classis defined using square brackets [] like this:

Here we search for any th characters that have o character or i before it.

This comes handy when you are searching for words that may contain upper or lower case and you are not sure about that.

Of course, it is not limited to characters; you can use numbers or whatever you want. You can employ it as you want as long as you got the idea.

What about searching for a character that is not in the character class?

To achieve that, precede the character class range with a caret like this:

So anything is acceptable except o and i.

To specify a range of characters, you can use the (-) symbol like this:

This matches all characters between e and p then followed by st as shown.

You can also use ranges for numbers:

You can use multiple and separated ranges like this:

The pattern here means from a to f, and m to z must appear before the st text. 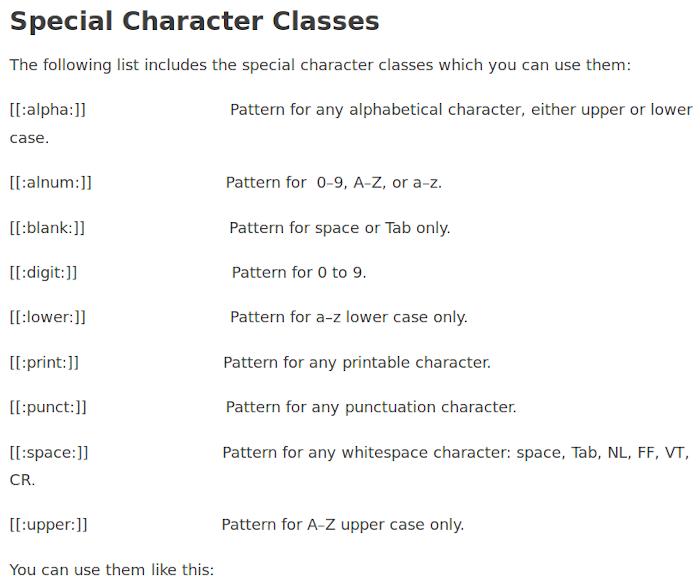 The asterisk means that the character must exist zero or more times.

This pattern symbol is useful for checking misspelling or language variations.

Here in these examples whether you type it color or colour it will match, because the asterisk means if the “u” character existed many times or zero time that will match.

To match any number of any character, you can use the dot with the asterisk like this:

It doesn’t matter how many words between the words “this” and “test”, any line matches, will be printed.

You can use the asterisk character with the character class.

All three examples match because the asterisk means if you find zero times or more any “a” character or “e” print it.

The following are some of the patterns that belong to Posix ERE:

The question mark means the previous character can exist once or none.

The question mark can be used in combination with a character class:

The plus sign means that the character before the plus sign should exist one or more times, but must exist once at least.

If the “e” character not found, it fails.

You can use it with character classes like this:

if any character from the character class exists, it succeeds.

Curly braces enable you to specify the number of existence for a pattern, it has two formats:

n,m: The regex appears at least n times, but no more than m times.

In old versions of awk, you should use –re-interval option for the awk command to make it read curly braces, but in newer versions you don’t need it.

In this example, if the “e” character exists one or two times, it succeeds; otherwise, it fails.

You can use it with character classes like this:

If there are one or two instances of the letter “a” or “e” the pattern passes, otherwise, it fails.

The pipe symbol makes a logical OR between 2 patterns. If one of the patterns exists, it succeeds, otherwise, it fails, here is an example:

Don’t type any spaces between the pattern and the pipe symbol.

You can group expressions so the regex engines will consider them one piece.

The grouping of the “Geeks” makes the regex engine treats it as one piece, so if “LikeGeeks” or the word “Like” exist, it succeeds.

We saw some simple demonstrations of using regular expression patterns, it’s time to put that in action, just for practicing.

Let’s look at a bash script that counts the executable files in a folder from the PATH environment variable.

To get a directory listing, you must replace each colon with space.

Now let’s iterate through each directory using the for loop like this:

for directory in $mypath; do

You can get the files on each directory using the ls command and save it in a variable. 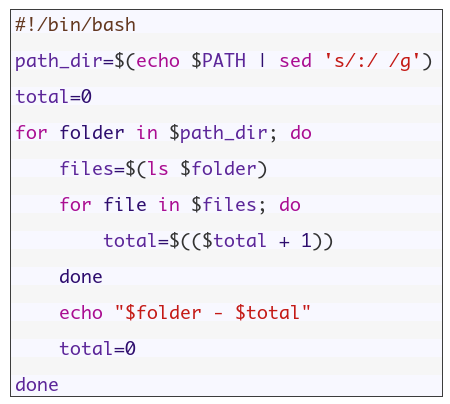 You may notice some directories doesn’t exist, no problem with this its OK.

Cool!! This is the power of regex. These few lines of code count all files in all directories. Of course, there is a Linux command to do that very easy, but here we discuss how to employ regex on something you can use. You can come up with some more useful ideas.

There are a ton of websites that offer ready to use regex patterns for everything including e-mail, phone number, and much more, this is handy but we want to understand how it works.

The username can use any alphanumeric characters combined with dot, dash, plus sign, underscore.

The hostname can use any alphanumeric characters combined with a dot and underscore.

For the username, the following pattern fits all usernames:

There are special rules for the TLDs or Top-level domains, and they must be not less than 2 and five characters maximum. The following is the regex pattern for the top-level domain.

Now we put them all together:

Let’s test that regex against an email:

This was just the beginning of regex world that never ends. I hope after this post you understand these ASCII pukes 🙂 and use it more professionally.