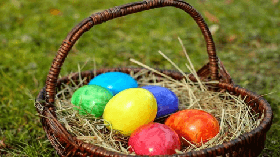 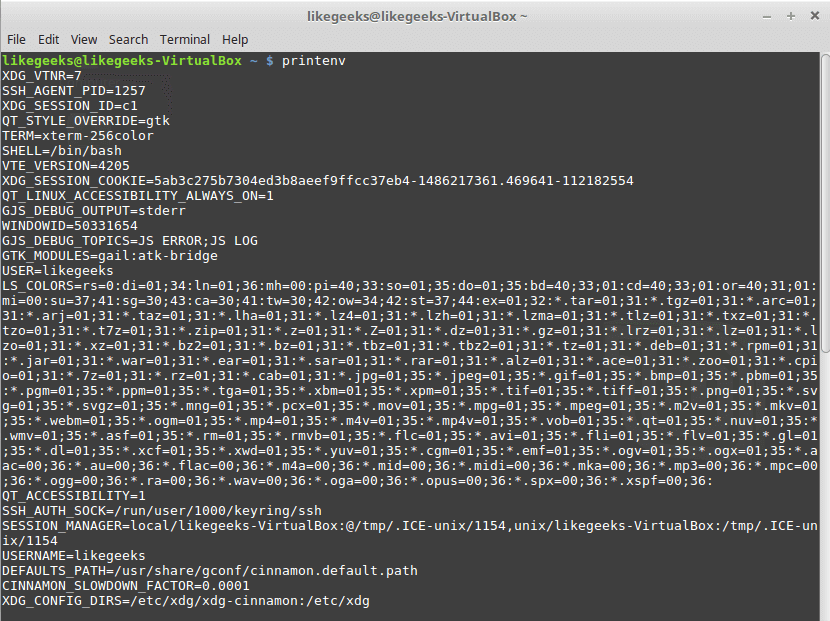 As you can see, there are a lot of global environment variables, to print only one of them, type echo command followed by $VariableName. Ex: to print HOME variable type echo $HOME.

Actually, the Linux system also defines some standard local environment variables for you by default.

To view the global and local variables for the shell you are running and available to that shell, type the set command.

To declare your own environment variables directly from the shell, type variableName you want, followed by an equal sign and the variable value WITHOUT any spaces:

And to print the variable value, use the echo command:

Sure enough, it prints likegeeks.

OK, what if your variable is more than one word; may be a long string, you can put the string between single quotations:

mysite=’likegeeks is a website that offers tech tutorials for geeks’

And if we type echo $mysite

If you forget the single quotation, the shell will assume that the second word is another command and will show an error.

Once you have set your local variable, it will be visible in the currently running shell scope and that means if you start another shell window the variable will not be available in that new window.

As you can see I don’t use dollar sign with the export command so make sure of that.

But there is something, when I close the shell and open it again the variable is gone, so how to make it persistent?

This can be done by using the unset command:

As we know, the system defines some variables for us, one of those variables is the PATH variable, this variable holds some paths.

These paths are the default paths that the shell uses to look for a command when you type it in the shell.

If you add a folder path to the PATH variable, the shell will look in that folder for any executable to run when you type any command.

Just append the path variable followed by a colon and the new directory like this:

And if you want to persist the PATH variable, you have to edit the .bashrc file and add type it like this:

There is a useful trick but RISKY that some sysadmins do which is adding a period . to the path variable. By doing this, the shell will search for executables in the current directory you are in wherever you are.

This is relatively risky, you might give the attacker the opportunity to run a malicious script or malware in his current directory, so if you do this trick, you should know what you are doing.

You can start a bash shell with one of the following ways:

When you log onto the system, the search for those startup files to process the commands from them:

/etc/profile runs on every startup with every user, the other 3 files run for every specific user, you can call them user specific environment variables.

When you go to the rescue mode, this is the interactive shell.

If you start an Interactive shell, the system will not look for /etc/profile but instead will look for .bashrc in your HOME directory.

This shell runs by the system itself to run a shell script.

Users can customize the above-mentioned files to include environment variables, just edit the desired file and type the variable you want and save it.

You can store many values as you want in one environment variable which is called array.

Now if you check the value of that array using echo command, you will find it returns the first element only.

To get a specific element, just reference it by its position, and the positions start from zero so to get the third one, type it like this:

To display the entire array type asterisk instead of a number:

You can remove an element of the array using unset command:

Or you can remove the whole array: